By continuing your visit to this site, you accept the use of cookies. Read more
It is currently Sun Jun 07, 2020


Get the latest information from the PHD about COVID-19. DOH: https://www.doh.gov.ph/2019-nCoV and WHO Tracker: https://who.sprinklr.com/

Vista has tremendous physical strength as he is able to match against Dracule Mihawk, who is known as the strongest swordsman in the world. He was capable of deflecting an attack from an axe-wielding giant, as well as easily slice down cannonballs in midair.

Vista has extraordinary mastery in dual wielding swordsmanship and even Mihawk acknowledges his skills. He even managed to deflect Mihawk’s flying slash attack which is powerful enough to cut through battleships.

Jozu has demonstrated one of the greatest feats of strength seen in the series, though it is currently unknown how losing his right arm will affect his strength.

Despite his massive body, his speed and reflexes are on par with his brute force. This speed, combined with his Haki, makes Jozu particularly dangerous against Logia users.
Jozu ate the Kira Kira no Mi, a Paramecia-type Devil Fruit that allows him to transform parts and most likely all of his body, into diamond.

Jozu’s powers give him the ability to greatly increase his offensive and defensive capabilities, as his already strong physical attacks are enhanced by the density of his diamond body. His defenses seem to enhance exponentially, as he is able to block the strongest slash in the world from the world’s greatest swordsman, Shichibukai Dracule Mihawk, with no visible damage to himself, as diamond is one of the hardest substances in the world, along with Seastone and the Poneglyphs.

Shiryu’s strength is said to be equal to the Chief Warden Magellan. However, since Magellan’s work hours are limited due to his diarrhea, Shiryu was considered more dangerous.
Shiryu has extremely formidable speed, and has shown himself to possess incredible superhuman endurance.

He is extremely proficient in wielding his nodachi, having used it to kill numerous prisoners of Impel Down, all who were noted to be powerful and dangerous criminals. When his sword was returned to him after a long term imprisonment, Shiryu killed several of his fellow Impel Down officers in a split second, demonstrating extraordinary precision and dexterity in his swordsmanship.

Shiryu has eaten the Suke Suke no Mi, a Paramecia-class Devil Fruit which gives him the ability to turn himself and whatever he is holding invisible. With this fruit, he is able to cut opponents without being spotted, taking them by surprise. He held this ability in high regard in terms of usefulness.

Charlotte Katakuri is the strongest of Big Mom’s Three Sweet Commanders. Even as a child, his strength was compared to that of a “monster”.
Katakuri is extremely fast and possesses tremendous physical strength.

Katakuri is one of the very small number of people in the world who can use all three types of Haki. He’s able to use an advanced form of Kenbunshoku Haki which allows him to see slightly ahead into the future.

Katakuri ate the Mochi Mochi no Mi, a special Paramecia-type Devil Fruit that lets him create, control, and transform into mochi at will.

As a “special” Paramecia, Katakuri can actually change his body into mochi, akin to a Logia. When combined with mastery over Kenbunshoku Haki, he can predict the future and manipulate the shape of their bodies accordingly to avoid being hit by attacks.

Katakuri has also awakened his Devil Fruit powers, enabling him to transform inorganic material into mochi, enhancing the range of his attacks and capture field. 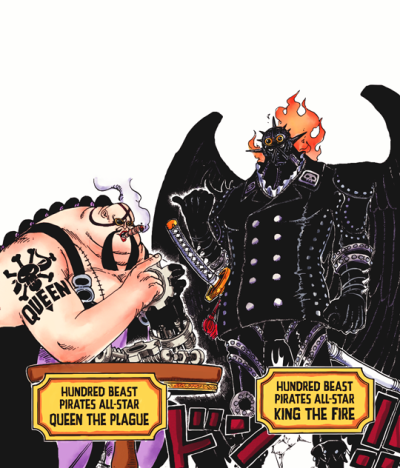 Queen the Plague is an All-Star of the Beasts Pirates and one of Kaido’s three right-hand men, the Disasters. It has been implied that Queen is even stronger than the extremely powerful Jack.

Queen has the strength to stop a punch from Luffy with only one hand and then toss Luffy away, though these actions were done with his artificial arm. He has very fast reflexes, as he was able to catch a punch from Luffy before it could hit him.

Queen ate the Ryu Ryu no Mi, Model: Brachiosaurus, an Ancient Zoan Devil Fruit that allows him to transform into a brachiosaurus hybrid and full brachiosaurus at will, granting him an immense boost to size and bulk. 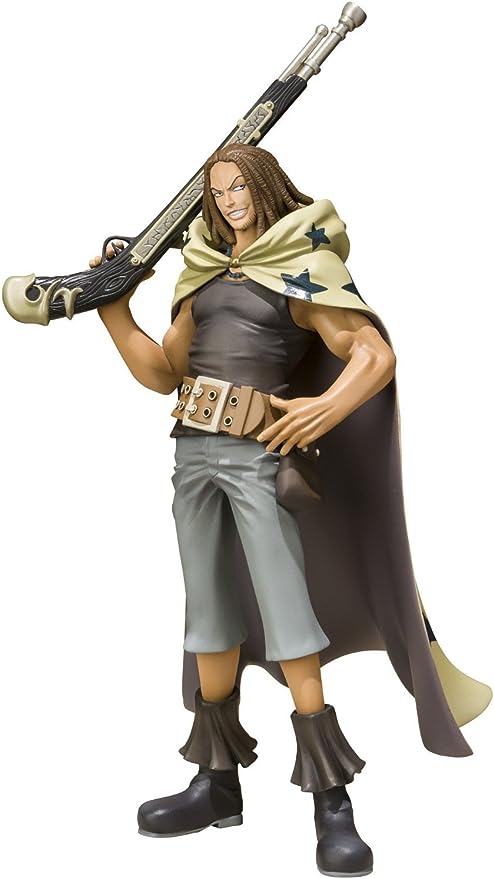 Shanks has been implied to have the best crew out of all the current Yonko and he would no doubt win in a full out pirate war among all the Yonkos. His executives Benn Beckman, Lucky Roo, and Yasopp have each won their own fame.

Yasopp is noted to be a tremendously skilled marksman, capable of shooting the antennae off of an ant at one hundred feet away without harming the rest of it. Luffy also stated that he had never seen him miss a shot. He is probably the best sniper in the world.

Marco is a very strong individual, as he demonstrated in the Marineford War that he was on a similar level of fighting as the three Admirals. He was fully capable of fighting admirals Kizaru, Aokiji, and Akainu while holding his own.

Marco the Tori Tori no Mi, Model: Phoenix, a Mythical Zoan-type Devil Fruit which allows him to transform into a phoenix, granting him the ability to fly.

While this fruit’s power is classified as a Zoan, due to the uniqueness of the phoenix, the additional powers it grants may be considered similar to those of Paramecia (the somewhat “superhuman” power that affects the user’s body: regeneration) and Logia (the generation of light-blue phoenix flames).

The fruit’s greatest attribute, however, is that Marco can recover from any damage he accumulates in his human form by reverting to his phoenix, or hybrid phoenix form, or just by summoning blue flames around his body. These blue flames are not hot and they do not burn or spread like normal fire; instead, they are what allow him to heal, and are referred to as the “Blue Flames of Resurrection”. Furthermore, the healing properties of his blue flames can also be used to treat other beings, albeit to a more limited extent, allowing Marco to act as an efficient doctor. 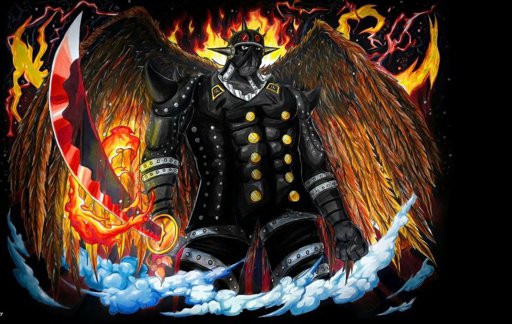 As one of Kaido’s three right hand men, King has a great amount of authority over the crew, second only to Kaido the general. King is supposedly the strongest Disaster of the Beasts Pirates.

King ate the Ryu Ryu no Mi, Model: Pteranodon, an Ancient Zoan Devil Fruit that allows him to transform into a pteranodon hybrid and full pteranodon at will. This fruit gives him the ability of flight, and he can perform extremely powerful aerial attacks from mid air as shown when he toppled the Queen Mama Chanter, a gigantic ship, with enough force to throw Big Mom off.
Befitting his epithet, King is able to produce fire, both in his human and pteranodon forms.
King probably has a connection to Impel Down. Maybe he has worked there in the past, perhaps he even was the head jailer at one point.

He is shown to have a fearless side, as he had no fear in attacking Big Mom, in spite of her strength rivaling his captain, and he even mocked her for trying to invade Wano with a single ship.

Lucky Roo is one of Yonko Shanks’ most important men. He’s the first person to kill someone both in the anime and the manga, by shooting a mountain bandit in the head at point blank range.

During Romance Dawn, we see one of Higuma’s men pointing a gun at Shanks’ head, then after Shanks warns him suddenly Lucky Roo appears and shoots him. Now here’s the question, how can a big man like that go there that quickly without being noticed? It is likely that he is based on Lucky Luke (a fictional cowboy -gunfighter- from the “Lucky Luke” Franco-Belgian comic book) that is known as “The man who shoots faster than his shadow”.

Lucky Roo he’s supposed to be a Haki master or, anyway, a master in something different; in particular, many speculated that he uses a technique called “Life Return”. In this case, Lucky Roo eats so much because he is storing energy for a battle. Life Return gives him the ability to control his body; this can be used to turn fat into muscle, or just turn fat into energy.

Across his voyages he’s learned a lot of experience, with an incredibly advanced intellect and great thinking capabilities.

When the Red Hair Pirates arrived at Marineford to stop the war, Beckman was able to climb on to a Marine ship’s mast and sit on it, all the while pointing his flintlock at Kizaru, without the latter noticing. Admiral Kizaru chose not to fight him, even though he had just fought the First Commander of Whitebeard’s crew and Whitebeard himself.

According to “One Piece: Vivre Card Databook” Benn Beckman is almost as strong as Shanks! His card says that Benn is incredible powerful in terms of physical combat. The card even says that “Comparable to Red Hair’s, this man’s existence is feared by even the powerful warriors of the New World!!”